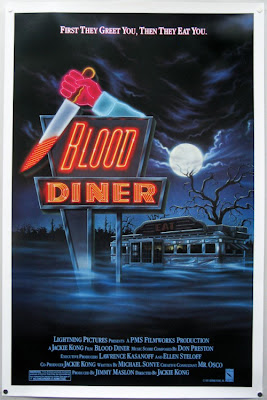 Movie-wise there wasn't very much that was good about the 80's. Of course Splatter films and Slashers being the main exception to the rule. Luckily for us Blood Diner is an all out 80's splatter flick.

Its obvious where the director got his inspiration from. With Blood Diner's alternate title being Blood Feast 2 and of course coming out more then a decade before Herschell Gordon Lewis did his own sequel to his classic cult flick. Its not easy for me to admit it either but Blood Diner really does make the better sequel.

The movie is dumb as can be but that is almost expected, after all this is the 80's but there is enough decapitation, dismemberment, cannibalism and nudity to keep a demented gore-hound happy.

Aside from the gore and obvious H.G. Lewis inspiration, Blood Diner also pays homage to the great Doris Wishman with footage spliced in from Another Day Another Man. At least these guys give respect where it is due and that is of course from the forefathers and foremothers of classic exploitation.

This time around we are not having a cannibals feast in the name if Ishtar. This time the Egyptian goddess is Shitaar and she is actually resurrected for a bit of blood letting and gory mayhem. While I of course will take the classic Blood Feast any day over this silly 80's knock off, Blood Diner is good clean fun. Okay maybe it isn't very clean. Its actually quite filthy and its not only filthy due to the senseless sex and violence. The movie is dubbed with some very childish dialogue. Filled with profanity and all that good stuff.

Some of the other treats that Blood Diner has to offer are Nazi wrestlers, Nazi rockers, rockabilly zombies, eyeballs are knocked from their heads, brains talk, stomachs open up and bite the heads from victims. Hooks are shoved through legs, women are split in half from achy-breaky skull to vagina, others have their heads sent flying off with broom as a weapon of choice. We are also treated to a brilliant scene of naked aerobics (complete with gory machine gun massacre). If the 80's is your thing be sure to give Blood Diner a go. Other then that this one is really only for the gore fanatics who are willing to sacrifice a bit of substance if it is made up for with shit-loads of the red stuff.