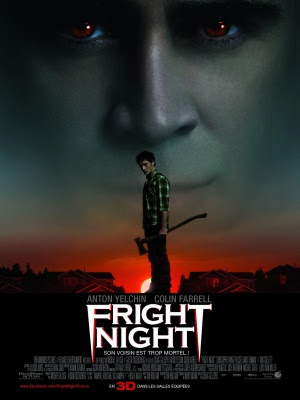 The original Fright Night isn't exactly the worlds greatest vampire flick. It is a pretty cheesy 80's movie but still has managed to carry some what of a cult status. Then came Fright Night 2 and I didn't know it was possible to make a worse movie then that one. That is of course until the 2011 remake.

What we have here is another painfully enbarrassing remake from the 2000's. It stars Hollywood boy Colin Farrell whom I have never seen anything else from since big budget Hollywood flicks are not my bag but I hear he is a hit with the ladies and I suppose that is why the director has him walk around in his wife beater and turn on the house wives in the area. Farrell plays the evil vampire who moves next door to a trendy highschool kid. The two will battle it out in an awful mess of cgi and shitty over budgeted special effects. Shitty is an understatement. I am the first to admit that I dont watch these computer graphic time wasters but I would imagine that the average Hollywood shit-fest is slightly better in the f/x department then this one.

This thing was also supposed to be shot in 3D which is also pretty fucking ridiculous. The 3D scenes are wretched with exploding glass and more bad cgi blood which sprays straight at the camera. It looks like shit on its own and I really did not need to see it in a third dimension.

If you remember from the original the great Roddy McDowall (Class Of 1984, Legend Of Hell House) played Peter Vincent : The Vampire Killer. This time around we get some flamboyant schlep who runs around in a glittery cape with a very fake beard. However for me the best character in the original was Evil, the super-nerd-vampire. I suppose the nerd in the remake is the only good character as well but of course he doesn't compare to Evil.