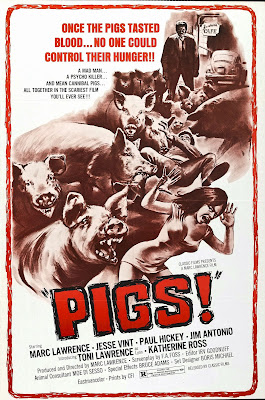 Here's another strange one from the demented 70's. Originally titled Daddys Deadly Darling, which is a very suiting title considering the director Marc Lawrence used his own daughter for the psychotic killer and lead actress. Toni Lawrence plays Lynn Hart, a girl with a whole lot of problems.

Pigs opens up with a bang. Its a incestuous rape scene between father and daughter. After daddy forces himself on his daughter his little girl gets her revenge by stabbing him to death. Little Lynn Hart stabs daddy over and over again with a big kitchen knife. The beautiful thing is that this all happens within the first few seconds of the movie. Now they certainly have my attention. Now we jump forward in time and Lynn Hart is in a mental institution where she is receiving psychiatric help. It seems that Lynn's daddy issues have only gotten worse with time. She spends most of her time talking to her dead, rapist father on the telephone and refuses to admit that he is dead.

Lynn manages to escape from the loony bin and winds up at a remote roadside cafe and hotel run by a old nut-bag named Zambrini. The character of Zambrini is really what makes Pigs worth watching. This guy is as socially awkward as they come. He rants on and on in a very insane manner. I can only really relate it to the madness of characters in The Texas Chainsaw Massacre (1974) or something like that. Lets just say this guy is out there. Aside from his awkwardness around people Zambrini has some very strange hobbies. It just so happens that behind the cafe Zambrini has a pig pen full of hogs, hence the title of the movie. The only problem is that Zambrini is feeding these Pigs human flesh. Bodies dissapear from the local morgue and apparently all of the women who have worked at Zambrini's cafe have also gone up missing. The odd thing is that everyone in town, including the authorities seem to know about this but there is always "a lack of proof" that Zambrini is involved, so basically the police ignore the problem and refuse to search the property. Instead dip-shit head police officer just asks Zambrini every few days if he is doing anything wrong and when Zambrini says No! the police just take his word for it and move on.

As the film goes on Lynn and Zambrini develop a strange father and daughter relationship but its not long before Lynn is knocking off the local men. Apparently there aren't to many good looking gals in this town and all the men want a grab at Lynn's massive mellons. "Im attracted to you. We don't see to many attractive women in these parts". The only problem is that when a man gets on top of Lynn, she goes ape-shit and has daddy flashbacks of rape. Naturally she slashes the horny men up with her trusty straight razor in true Giallo fashion. Zambrini covers up his new daughters crimes and feeds the corpses to his Pigs. Over all Pigs is a pretty good watch. It does have some problems with the editing and some times its a bit to dark to see whats going on but as whole its a pretty enjoyable piece of trash from the sick and twisted 70's. This one has some really crazy characters, flesh eating Pigs, stabbings, slashings, and of course a really stupid police force. My kind of movie.