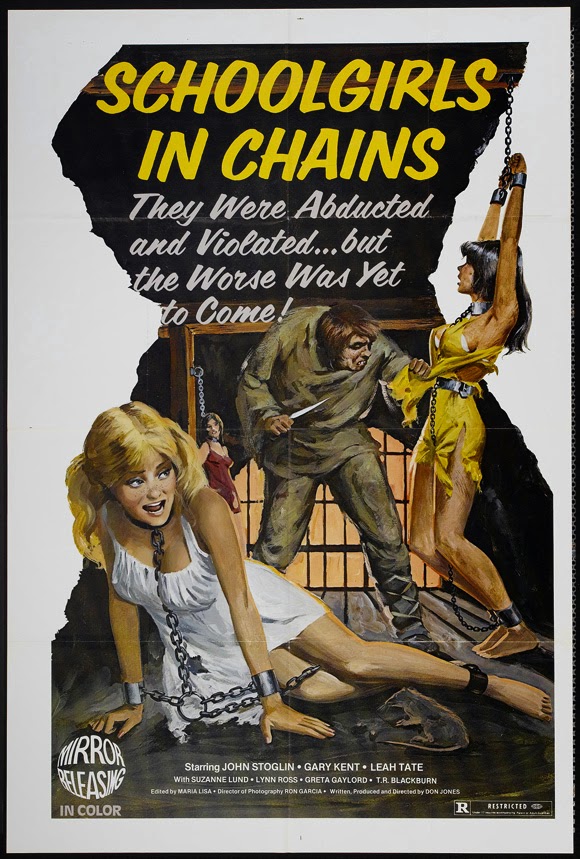 What do you get when you mix Mothers Day with Barn Of The Naked Dead? You get School Girls In Chains of course. This one went under quite a few different titles, It was originally going to be called The Black Widow which is a relatively boring title. It was also known as Abducted, Abduction, Come Play With Us and Lets Play Dead. It is most widely known under its most exploitative title School Girls In Chains and now for some reason the Code Red DVD release of it is just entitled Girls In Chains. What ever you want to call this one it doesn't change the fact that this one is Sick! Sick! Sick!

I absolutely love this movie. It follows two brothers, Frank and John. Frank is a hulking lunatic played by Gary Kent who has tons of exploitation credits to his name (Satans Sadists, Black Klansman, Thrill Killers) and John is a depraved, greasy retard with the intellect of an eight year old. The two brothers have some serious mommy issues and obey her every order. Luckily for these two sicko's mommy lets them keep girls locked up in the basement. The girls in the basement serve as Johnny's personal toys. He takes them out and plays with them when he is bored. The games they play have to be seen to be believed. It seems that John's favorite game is doctor. "Lets play doctor" now I always knew that playing doctor was naughty but when Johnny plays this game it is out right disturbing. First he makes the girls take their clothes off. Then he jabs their breasts with a wire hanger that he pretends is a stethoscope. Then he makes them swallow pills and stabs them in the ass with a home made syringe. "Let me check your bottom".

Aside from Johnny's sick and twisted version of playing doctor we are also treated to one of the weirdest scenes ever in exploitation horror. It is the leap frog scene. Yes you heard that right, fucking leap frog. In one of the movies greatest moments we see Johnny the retard playing leap frog with a frightened young girl. The girl is pretty much naked on all fours, scared out of her wits while Johnny jumps around like a idiot and hops over her again and again. Who thinks this stuff up? Leap frog?

While Johnny spends most of the movie tormenting his play things, we see a whole lot less of Frank but when Frank does come into the picture he is more ruthless and horrible then his numb-skull brother. In one scene Frank very awkwardly rapes one of his brothers female toys. After the rape Frank proceeds to tell his victim that he had a girlfriend once but she left him when she found out that he wets the bed occasionally and has been having sex with his mommy since he was 15 years old. This is all told through a flashback which is also pretty disturbing. We watch Frank grope his mothers boobs as his soon to be wife watches in horror.

There are a few other twists and turns in this one but we all know we didn't come into this one for a brilliant story. We really came here to see retards have their way with chained up women and thats what we get. The movie does have some problems with the audio. At certain times the sound gets very low, making it hard to hear the dialogue. There is also a very strange choice of music in this one which I have to admit I'm very partial to. The film does offer up some surprisingly nice cinematography and we can thank director Don Jones for much of that. Don Jones also did the camera work on House Of Seven Corpses and would go on to direct the 80's Slasher The Forest.

So check this one out for some fun with a maniacal rape happy family, retards and of course LEAP FROG!!!