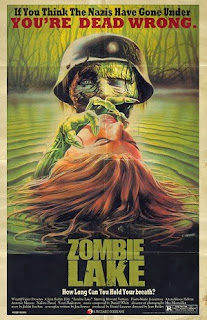 Its funny how our taste in cinema changes over the years. It can almost be related to lowering ones standards sexually as you grow older. Zombie Lake is a perfect example of a change in taste for me. I first discovered this particular piece of Eurotrash in my mid teens. I remember watching it with a few friends and being bored stiff. I just despised it in every way. Of course I have seen it many times since due to the fact that Zombie Lake does have a rather large cult following and it isn't an overly rare title. I have to admit that the movie has grown on me pretty well and now has its own little spot in my depraved heart.

Whenever Zombie Lake comes up, I can't help but be reminded of Jesus Franco's Oasis Of The Zombies which was probably the only zombie flick I hated more then Zombie Lake in those teenage years. In those days my only slightly damaged brain probably did not realize that directors Jean Rollin and Jesus Franco go hand in hand, kind of like pepsi and coke. Naturally I am not so far gone to the point where I like Oasis Of The Zombies but Zombie Lake on the other hand does hold a certain charm. This in its self is a strange statement for me to make because I actually do prefer the films of Franco over those of Rollin, Oasis Of The Zombies excluded of course. Well anyway, here it is... Zombie Lake.

As you might have guessed, Zombie Lake like any other movie directed by Jean Rollin and writen by Franco is chock full of nudity and sleaze. This one tells of a lake which is haunted by the "ghosts" of Nazi's that were killed and left to rot in the murky water. Naturally the Nazi's come back in zombie form to take revenge on the villagers who took their lives. For some reason the majority of the zombies victims seem to be naked women. Altho the nudity is beyond gratuitous, this is not grounds for complaint. If the sensless scenes of boobage and bushes were taken out I am pretty sure Zombie Lake would be close to unwatchable, in the ranks with the dreaded Oasis Of The Zombies!

Aside from the large amounts of naked flesh Zombie Lake offers up a fair amount of bloodletting and some of the most cheesy zombie makeup in cinematic history. In one of my favorite scene a zombie munches on a womans neck in the streets but the bright green makeup is rubbing off all over the girls face. Another incredibly ridiculous moment involves the worlds worst flame thrower. It seems like it might be a general rule of thumb to not use flame throwers in a low budget movie. When I think flame throwe, I think of a powerful force of fire being sprayed over vast distance... Well not in Zombie Lake. Instead we get something that can only be described as a flame-pisser. These things seem to lightly drip fire from the barrel and two words that are never meant to go together are "drip" and "fire", that is unless we are talking sexually transmitted diseases.

With that being said Zombie Lake turns out to be a fun little piece of Euro-sleaze. However the movie does have a few bad points. The main one being that it just runs so damn slow at times. The only thing slower then these water logged zombies is the actual movie itself. It has that oh so typical Jean Rollin dream like pace which is very likely to force the viewer to feel very sleepy. Then there is this ridiculous love story thrown into the mix which just helps to slow the movie down even more. However if you have a bag of speed next to you and you are able to make it through the slow parts you just might enjoy this trashy effort from the kings of European trash films.

Anyone who likes this movie should certainly check out Shock Waves which as far as I know is the first Nazi zombie flick to take place under water. Shock Waves is without a doubt the better of the two films but it doesn't offer up all the under water scenes of vaginas and we all know that can be a problem in its own. 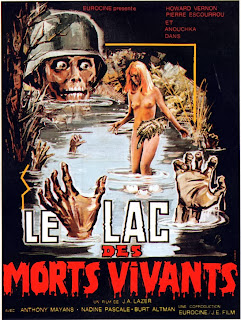