The House With Laughing Windows (1976) 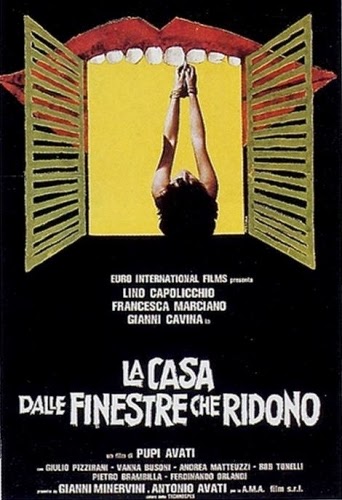 The Hose With Laughing Windows isn't your typical Giallo. It focuses more on atmosphere and mood then it does on gore and carnage. The creepy tone is more reminiscent of a gothic, haunted house movie or something that Mario Bava would have done then it is to later movies in the genre. Tho I didn't catch any windows "laughing" the doors and windows do seem to open and close on their own accord, which adds a sort of supernatural element to the movie. None of this is ever explained, which I find to be slightly annoying. I'm just gonna assume that the buildings in this movie were built on unlevel grounds and that is why these windows seem to have free will.

Stefano is hired by a midget to restore a painting in a church. It just so happens that the painting holds very dark secrets and has a sinister background. It turns out that the artist was a psychopath named Legnani.
As the secrets unfold, we learn that Legnani was most interested in the dying. The only problem is that he wasn't waiting for his subjects to die of natural causes. Legnani had two sisters, who perhaps were more mentally unhinged then he was. They would abduct unwilling subjects, torture and kill them so Legnani could paint them. Pretty interesting plot going on in this one. The only problem is that there is way to much of the talky stuff and very little murder and mayhem. As I said this one relies much more on its atmosphere and story line.

By the time Stefano learns of the two sisters it is to late. Everyone around disappears or ends up dead. Its not long before Stefano is running for his life. The House With Laughing Windows does have a twist ending that I highly doubt anyone would see coming. It comes completely out of nowhere in true Giallo fashion with little or no hints. Although I really did like this movie I would say it doesn't have the highest replay value. If only they added in one or two more deaths in the earlier part of the film, it would help this thing move along at a better pace. However die-hard Giallo collectors will undoubtedly like this movie.

***Spoiler alert***
It really is the ending that makes this whole thing worth while. It turns out that the local priest is actually a woman. While it may be the norm for a Italian Giallo to use the priest as a psychotic killer I have never seen the priest expose a melon heavy tit to the audience and start speaking in a woman's voice. Awesome!! Aside from the transsexual priest, House With Laughing Windows offers up three pretty violent stabbing scenes and all of them are shown in close up with all the gory detail. In another scene a man is thrown from a window and left with an achy-breaky skull on the pavement, We also get a relatively nasty rape scene where a cackling, church going psycho has his way with a unwilling victim who is wearing some of the largest underwear in cinematic history. I mean it! Her panties make those 60's Nudie Cuties underpants look like dental floss g-strings. Aside from that we get one or two off screen murders for the sake of plot but when it is all said and done the the violence in the movie is kept to a minimum.