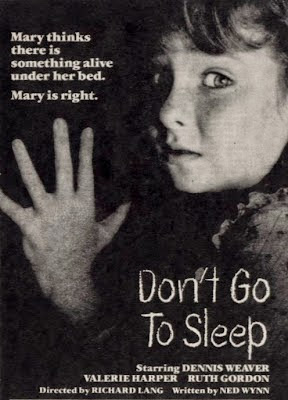 I know its hard to believe but in the 70's and 80's every once and a while there would be a made for television horror flick that is actually kind of cool. The two that usually come to mind for me is Bad Ronald and The Crawlspace, not to be mistaken for the movie with Klaus Kinski of the same title.

This one most certainly scared quite a few families in the early 80's. The thing that is so surprising about Don't Go To Sleep is how well done it all is. The story is good and creepy, the camera work never seems cheesy like in so many other made for TV movies and probably most importantly the acting is really good. This especially goes for Robin Ignico who was only 12 years old when she stared in this movie as Mary a psychotic little girl who hangs out with ghosts and kills just about everyone in her family one by one. Its hard to give this a sub genre classification because it has so many different elements to it. It's kind of a hanuntings and ghosts movie but its also a killer child movie but then at the same time it deals with a lot of drama. In fact Don't Go To Sleep is very sad at times. We watch an extremely dysfunctional family deal with problem after problem. Of course everything gets worse when they start to be killed one by one but none the less the movie is a roller coaster of emotions. If I had to describe Don't Go To Sleep with one word I would probably just call it DEPRESSING. However it still manages to deliver the creepy stuff.

So if you're into depressing movies or psychotic murdering children you could do worse then this. I'm personally really bored with the modern approach of creepy little girl ghost movies so this one was a breath of fresh air. It kind of plays like a less sleazy version of Cathy's Curse with some elements of Carrie thrown in. It also comes complete with a twist ending which I won't be giving away. However some of the highlights include crash and burn cars with children in it. A child falling to his death, a nice comfy bath scene with a zappy radio, a murderous lizard named Ed and one of the weirdest choices of weapons to ever hit the television screen. A pizza cutter? If I had some little brats of my own I would surely sit down and enjoy this one with the family. 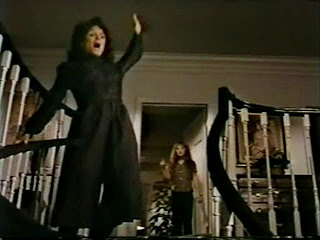