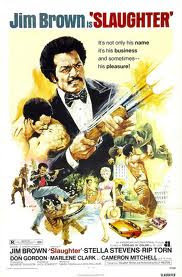 Jim Brown is Slaughter "The baddest cat that ever walked the earth". Slaughter is not only his name... Its his business. When Slaughter's daddy gets knocked off by some greasy Italian mobster types it is time to get revenge.

Slaughter intercepts a drug deal at the airport and kills the wrong man. The FBI bring him in but instead of arresting him they send him to South America where he will track down the man that killed his father and kill him but he also has to bring back information about "The IBM computer" wow pretty weird to hear this stuff in a 70's Blaxploitation movie huh? Anyway, Slaughter couldn't give a shit about that jive-ass computer shit. "When I find em, I'm gonna kill em... and anyone else that gets in my way".  Slaughter is another example of a blaxploitation bad-ass character who is too cool for life. He gets all the bitches. Even the white ones and of course kills any honky who has the balls to step up.

When I said that Slaughter gets all the white bitches did I mention that Stella Stevens (Poseidon Adventure) is his main girl. Slaughter came out the same year as Poseidon and Stella is looking pretty ripe in here and luckily for us dudes this mama doesn't mind showing off some naked flesh in this one. We are treated to bikini shots, a sex scene and a steamy shower scene. Thank you Stella. We are also treated some darker meat & gratuitous nudity from Marlene Clark who Slaughter strips naked and throws her out into a hallway. Aside from the females Cameron Mitchell plays a racist cop "Who do you think you are, nigger?" and one of my all time favorite actors, the great Don Gordon (The Mack, Out Of The Blue) shows up as Slaughters white cowardly partner. Don Gordon is great as usual. He can't get any of the bitches and is basically afraid of his own shadow yet somehow he never misses out on any of Slaughters action. Shoot-outs, car chases and brawls, Don Gordon is there. Rip Torn is our main villain here. He is a woman beating, friend killing, racist, mobster who wants Slaughters head.

Slaughter has a very cool and stylish look to it. They use a lot of wide angel lenses and fishbowl lenses. Stuff like that to heighten the action scenes. We have a awesome scene where Slaughter chases a plane down a runway and crashes his car into it. There is plenty of bloody shootings (complete with 70's blood and squirting squibs), naked female flesh, jive 70's jargon and memorable quotes "You know what they say about these dudes... They all got rhythm", knife fights, crash and burn car chases, an awesome soundtrack and a man who is burned alive inside his car.

They made a sequel to this called Slaughters Big Ripoff which I might like just a little bit more for its over the top shenanigans but both films are a great watch for lovers of blaxploitation action movies in the urban jungle.