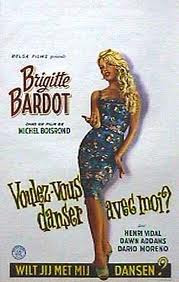 Brigitte Bardot looks amazing in this one and Come Dance With Me is a nice change of pace from the average sexy comedy that we are used to seeing from the French sex symbol.

Bardot falls in love with an attractive dentist and marries against her fathers will. The good looking young couple find themselves in a fight and both go their own ways on the town. Briggite Bardot goes to a raunchy strip club and hubby goes to a night club where he meets Anita Flores played by the beautiful 50's pin-up Dawn Addams. The stunning red-head seduces the young groom in a very much appreciated scene of gratuitous nudity. It should be illegal to have two women as beautiful as Brigitte Bardot and Dawn Addams together in the same movie. Anyway, Anita's real lover is lurking in the shadows photographing everything and Bardot's husband is caught on camera with tit in mouth. When the red-headed beauty sets up a time and place for the blackmail money transaction hubby finds her dead and cold on the floor at her dance studio.

Things get worse and worse for the young doctor from here on. A witness has seen him in the room standing above Anita's dead body and in a panic the accused takes off running. Together Brigitte Bardot and her husband try to solve the mystery of Anita Flores murder.

Bardot takes on a job at the dance studio and searches for clues. We are treated to many nice short skirt dance scenes from our favorite sex-kitten and there is not one frame in the movie where she isn't an image of perfection but Come Dance With Me works well on its own as a mystery. Of course the hot women is an added bonus and I admit I probably would never have seen this movie if it weren't for miss Bardot but I am very glad I did.

This one comes complete with some daring subject matter for a 50's movie which you would never see in an American film such as homosexuals, lesbians, transvestites and comes complete with male and female nudity, murder, bitch slapping and a dude with the biggest ears in cinematic history. If a guy with ears this big can still get girls like this it just goes to prove that there is still chance for me yet.

Come Dance With Me is a must for all Brigitte Bardot collectors. Its sexy, funny and works very well as a mystery and a love story at the same time. It can be a bit silly from time to time seeing Bardot act as a detective but its nice to watch her do anything. 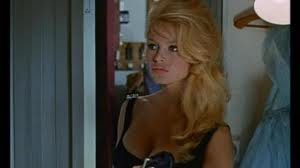 Email ThisBlogThis!Share to TwitterShare to FacebookShare to Pinterest
Labels: Brigitte Bardot, Come Dance With Me, Do You Want To Dance With Me, Mystery, Sexy Girl