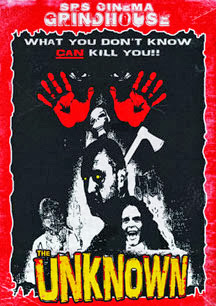 Im not quite sure why I picked this one off the shelf in the video store. What I am sure of is that I regret it with all my heart. This Sweedish, independent, shit-fest is your typical shot on video waste of time. The usless director seems perfectly content with shooting the least possible interestng actions. Countless scenes of bad actors walking through the woods, opening doors, sitting, breathing etc. seems to eat up the majority of the running time which turns a 75 min. movie into a long, boring, slugish nightmare and I do not use the word nightmare in a good way. Aside from the seemingly endless footage of people wandering around in circles there is also another major horror movie No-No! The Unknown sports a cast of three. Anyone who has seen enough low budget horror films knows right off the bat that if there is only three characters, the film has no chance of redeeming its self with any sort of a bodycount. Still I put on my cinema combat boots and stuck this one out till the end which of course was a big mistake.

The Unknown tells of three boring bastards who stumble upon a car wreck in the middle of nowhere. Instead of minding their own buisness they get out to investigate, only to find that the car is empty. Naturally these ass-hats decide to take to the woods on foot, in search of whoever was behind the wheel. The get lost or something and shack up in, well... a shack and then the movie turns into a sort of demonic possession type movie. So this opens up the door for the film makers (if we can call them that) to have all sorts of ghostly and supernatural things to happen without explaination or reason. This is yet again one of the things that I absoloutly can not stand. However there is one half way creepy scene in an atic, where a ghosty figure kind of hobbles torwards out main character while bound up in chains and gore. We are also treated to a suicide scene complete with shitty CGI brain matter and a chubby axe weilding psycho who dismembers his friends girlfriend but lets not fool ouselves here, this movie was made by a bunch of hacks. The main character wears his hair in a ponytail and rocks a Nirvana T shirt which is of course about as cool as a CGI suicide scene. Fuck!

Anyone who grabs there artistic influence from anything in the 90's, Be it music or cinema, should probably just quit all together. Don't make the same mistake I did kids. Just leave this one on the shelf at the video store. 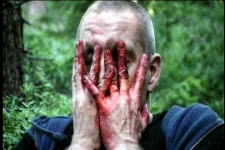 Email ThisBlogThis!Share to TwitterShare to FacebookShare to Pinterest
Labels: Hauntings And Ghosts, Unknown (The) (2007)