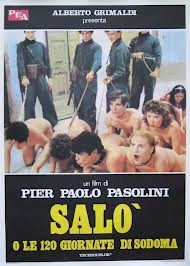 In recent times it has become extremely trendy to talk about ultra disturbing cinema. Movies like Salo, A Serbian Film, Cannibal Holocaust and Martyrs are probably amongst the most trendy to talk about. However this new obsession amongst the Internet babies is not very surprising. For one this useless generation were never really given anything interesting to look at. Secondly they are about as disconnected from reality as possible. It is only natural that images of extreme violence and brutality can amuse them for a moment. Its just to bad that the majority doesn't have the slightest clue about cinematic artistic expression. There is more beyond the picture then shock value.

For me Salo stands strong as a message in rebellion. It is not a pretty picture and it was not intended to make you feel good about yourself or other humans, especially those in power. For me Salo installs hatred. Hate for the world leaders. Hate for the political power and shows mankind as the disgusting infection that it really is.

If you are older then 25 you are likely to see this film in a very different light then that of the Internet generation. Unless if you are some kind of sick fuck who enjoys watching children being brutalized Salo is likely to set you into a state of depression. Even a life long horror-hound like myself felt the power of this film and even looking back at it now I am equally affected by the harsh and cruel images that spew across the screen.

Inspired by the writings of De Sade and the fascistic political scum of Italy, director Pier Paolo Pasolini died for art shortly after creating Salo. The controversy that surrounds the picture is enough to keep Salo interesting for a life time and the final product is just as strong.

Four fascists abduct nine young boys and nine young girls with the intention of sodomizing them for 120 days in Salo Italy. The message is that the whole country is in danger from these deranged fascists and the innocent youth will become corrupted and feel the brunt of the force. For 145 minutes you will witness children being raped, tortured and eventually put out of their misery in different and horrible ways, all for the selfish satisfaction of the president, the duke, the magistrate and the bishop. As the viewer we feel each painful minute of the 120 days and it is almost as if we are put out of our misery with the children at the end of the film. However for me one of the most powerful images is at the very end after the big massacre. We witness two very young soldier boys dancing the waltz after they have just witnessed the demise of these innocent people of their own age. For me this is a statement that this isn't over yet and perhaps the audience was not put out of its misery. The infection has spread and will continue.

Salo is framed perfectly. The sets are beautiful and the camera work is very elegant which makes the violence even more painful to sit through. The film is broken down into different segments which are introduced by prostitutes through graphic story telling. The first segment is the Circle Of Manias which focuses mainly on sodomy and sexual perversion. The second segment is The Circle Of Shit which is extremely grotesque and focuses on deification. The final being The Circle Of Blood which is the most violent and of course brings the film to its tragic end.

Some of the depraved delights that Solo has to offer is man on man rape, man on woman rape, golden showers and urination fetish, lots of shit eating and a giant feces diner party. I dare you to watch the first female victim eat shit and not feel it in your own stomach. Eyeballs are cut out, genitals are burned, a girl is scalped, nipples are burnt off, tongues are cut out, children are shot down, children are hung, children have their throats slit, there are giant orgies with adults and children, boys and girls are walked around on leashes and forced to eat nails. Etc. Etc.

As you might have guessed, Salo could never have been made in Amercia. American censorship is far to strong for this kind of cinematic art. After all American politicians act out their own brand of fascism differently then that of other countries. An American film maker could never have the chance to die for his art.

This Italian masterpiece is a must see for anyone who is into shocking cinema, art films or even horror fanatics. Salo is not a horror film by nature but its horror far surpasses just about anything that has ever had a wide theatrical release in America. See it and learn to hate your fellow brother.

Email ThisBlogThis!Share to TwitterShare to FacebookShare to Pinterest
Labels: Arthouse, Salo Or 120 Days Of Sadom