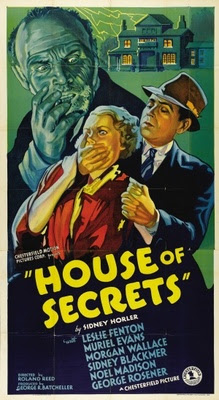 House Of Secrets is another example of a bad movie about a man who attains a mansion in the will of a deceased relative. Why did they feel the need to use this plot over and over again? Its almost as if producers from the 30's up until the 70's were like... Okay lets make a really boring movie. I know, lets do the ole inheritance thing again. That will be sure to bore the audience. 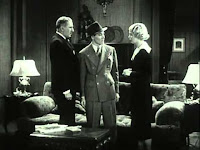 Unlike most of the other films that bare this old tired plot, House Of Secrets is not a haunted house movie and there is no murderous phantom roaming around through secret passages while strategically knocking off the characters. This one is nothing more then a crime mystery which takes place in an old mansion.

When a street smart American inherits an old house in England he is kept off of his own property by a woman who he falls in love with at first sight. The pretty blond and her father have been holding up in The House Of Secrets and refuse to allow the new owner of the home entry into his estate. Next a bunch of gangsters pop up and further keep the man away. When the police step into the matter they too give him a hard time and do everything in their will to keep him off of his own property. Its not until our unlucky main man bumps into a fellow American friend who happens to be a detective who helps him learn the mystery of The House Of Secrets.

The whole thing is pretty forgettable and there is really nothing interesting happening. The movie is extremely repetitive and it becomes annoying very early on. The entire movie pretty much consists of our main character trying to get into his mansion and then being forced off of the property in various different ways. While it is supposed to be a mystery/drama it comes off more comedic then anything else with the unbarring repetition. I personally spent more time watching the time run thru on my DVD players digital interface then looking at the screen. That's how boring this one really is. The dialogue is filled with typical 1930's jargon and I suppose that might get a chuckle or two out of some viewers but the characters are predictable and over all they are pretty lame.

House Of Secrets is filled with one cliche after another and unless you need a sedative I would recommend staying away from this one. Its a sleeper. 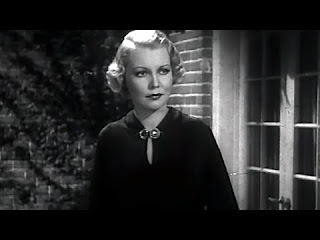 Email ThisBlogThis!Share to TwitterShare to FacebookShare to Pinterest
Labels: House Of Secrets, Mystery