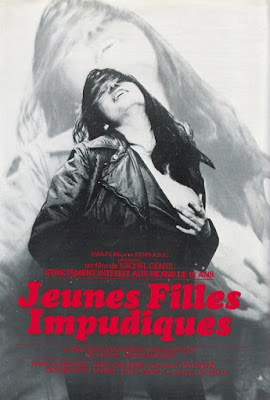 Here's another real weird one from Jean Rollin. In fact it is so weird it is hard to say what exactly the director was trying to do here. Is it a comedy? Is it an action movie? Is it a thriller? I guess its a bit of everything. 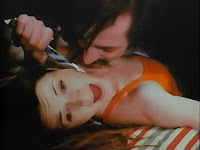 Schoolgirl Hitchhikers plays a lot like a 60's Roughie but since it is shot in color and came out in the sick sick 70's it comes off more as a confused mess of a sexploitation flick.

The paper thin plot follows two girls who enter what they believe to be an abandoned house. Its only a mater of minutes before the two little nymphos are stripping nude and rolling around in a bed together. Eventually the girls learn that they are not alone in the house when they bump into Frank, a jewels thief who is hiding out in the old house while he waits for his fellow crime buddies. Of course the two girls get it on with Frank and all seems pretty cute and tame until Franks friends show up and the stolen jewels are missing from Franks hiding spot. Naturally the two sex crazed girls are blamed for the disappearance and the hard earned criminals take turns torturing the gals between knife point rape sessions.

This makes for a pretty typical 1970's rape revenge plot but there is nothing typical about this one. Instead it comes off a bit like a comedy with ridiculously silly music playing of the scenes of savagery. Then we have a couple of bumbling idiots for police officers. They kind of just sit around and watch the violence being committed. One of the dumb cops is played by a miniskirt clad chick with pigtails and in case you haven't guessed she gets the old rape treatment as well. This one offers up some riding crop violence with a naked babe being whipped repeatedly and even some booby twisting with what appears to be some kind of fireplace instrument. There is also a bit of hot poker action and what has to be one of the weirdest shoot-out scenes to ever plague the big screens. The whole thing is a bit to strange to explain. It goes from being really artsy to a bit violent but it is all drawn out in such a silly manner.

Yet again I am not overly big on a Jean Rollin film but fans of his work might dig this one because there is still the typical Rollin sleepy moments that play like some surreal dream or something. Not really to much to recommend in this one aside from how weird it all is. I'm still confused! 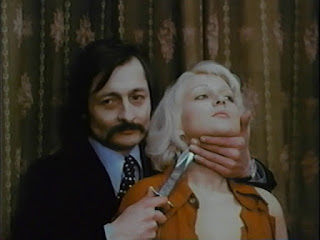