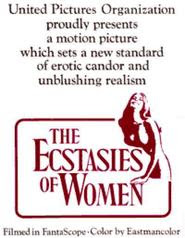 Ecstasies Of Women was a long lost Sexploitation flick from director Herschell Gordon Lewis until very recently when it was finally found and released on DVD for all us dirt-bags.

While it may not be the best example of a Sexploitation movie or even a Herschell Gordon Lewis film for that matter it does have some kind of bizarre charm like so many other films from the director.

The Ecstasies Of Women is sort of a anti-marriage film. This one follows a goofy looking prick named Harry who is about to be married in a few days. Harry and his pals go out to the local Go-Go titty-bar for one last drunken night of debauchery. Harry goes in and out of consciousness as he drunkenly sits in the sleazy boob-joint and dreams/fantasizes about various different women and the crazy sex-capades he would indulge in with them.

The story is simple and stupid. It has an odd combination of unintentional and intended humor which is typical of the great H.G. Lewis. Fans of 60's Sexploitation should not be let down by the massive amounts of giant jugs on display in this one. While I usually prefer my 60's smut a little more on the violent side, this one still makes for a decent time waster. While the dialogue does tend to get a bit annoying at times, especially in the beginning, there is still enough silliness and bad acting to keep us B movie guys entertained. One of the highlights is Harry's smooth talking hippie friend who looks more like a business man in some really dumb fashionable get-up. Or at least I guess it was fashionable for 1969!? This guy is a total jack-ass. Come to think of it, everyone in the movie is kinda a dork.

I guess if you have some kind of crazy plans of getting married this one might do the trick. I guess the over all message is that there are too many fish in the sea. Well there are also too many crappy exploitation movies out there. With that being said I take my hat off to the Godfather Of Gore, Herschell Gordon Lewis for yet again delivering a total piece of trash without any shame.

Well perhaps there was a slight bit of shame considering he is credited as "Mark Hansen" on this one. 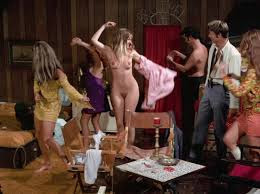